Show of hands: who believes that a head tilt makes a dog look cuter? I’ve found that almost all of my clients love a head tilt portrait! Many even request that particular poses and mention this mannerism among their favorite things about their dog.

A Psychology Today article, “Why Many Dogs Tilt Their Head When We Talk to Them” by Stanley Coren, Ph.D., FRSC., a professor of psychology at the University of British Columbia, explains a few theories behind this endearing behavior.

“Some people have suggested that dogs tilt their heads to the side when we speak to them so that one ear can hear more clearly what we are saying,” Cohen elaborates. “Others have suggested that it is a social signal–perhaps the dog recognizes that we respond to that particular posture in a positive way (because it is so cute), and therefore the dog adopts this position, because they are more likely to get smiles and rewards when they do.” 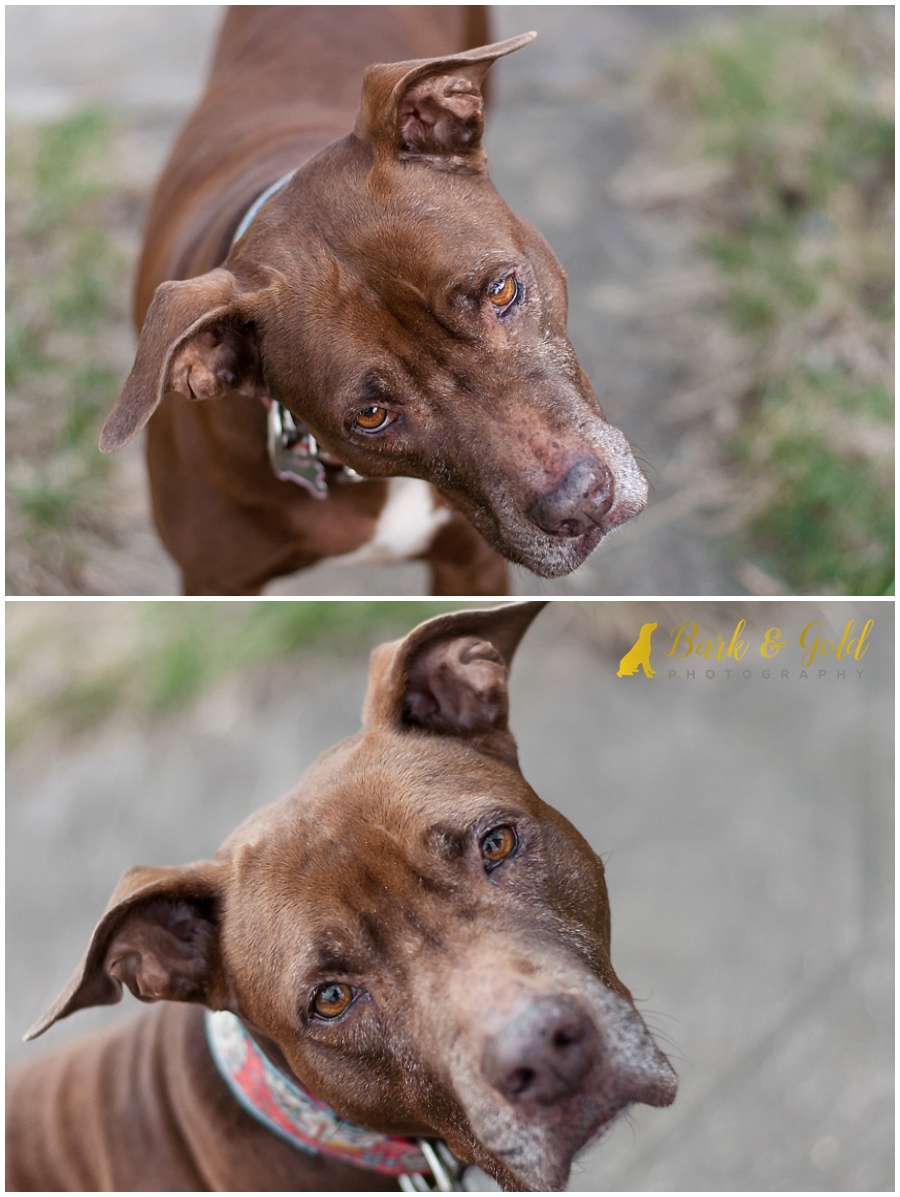 What Cohen also uncovered in his research, however, is that dogs are constantly scanning human faces for any information that helps them read emotional states. This point, coupled with how the shape of a dog’s muzzle can obscure a part of his vision, has been shown to help our canine companions compensate for this “blind spot.” To further support his theory, Cohen conducted an online survey of 582 individuals in which “71-percent of the owners of dogs with larger muzzles reported that their dogs often titled their heads when spoken to…only 52-percent of the owners of the flatter-faced, brachycephalic dogs reported that their dogs often tilted their heads when spoken to.”

Here are three of my fail-proof tips to help elicit an adorable head tilt from your dog.

In Margaret Bryant’s book, Dog Photography: How to Capture the Love, Fun, and Whimsy of Man’s Best Friend,  she explains that while one of the best ways to get a dog’s attention is sound, they can quickly desensitize to familiar sounds, adding, “You might have better lucky using sounds that the dog doesn’t know. Most dogs react to any sound that is new.”

One of my secret weapons for getting that what-was-that head tilt is the Looky Looky, a lanyard of enticing, unusual, and hilarious sounds seen around my neck at every session. Dogs just love its blue-lips whistle; it guarantees a head tilt almost every time. Other popular attention-getters come from its squeaker and The Wildly Noisy Wooden Thing.

No Looky Looky? No problem! There are  a variety of smartphone apps you can turn to as well. My favorites include Dog Sounds and iHunt by Ruger. Simply play your favorite and get your phone’s camera ready!

Other tilt-inducing sounds can be created with

Every dog has those words and phrases that trigger unbridled excitement and curiosity. Even familiar ones can become incredibly interesting when you mix up the inflection of your voice or raise the pitch at the end of a word as if you were asking a question.

Vary the Volume of Your Voice

If you’re anything like me, you probably talk to your dog 24/7…and if your dog is anything like mine, he probably presents selective hearing now and then. Varying the volume of your voice can be particularly effective in catching his attention. Bryant has found that speaking at a low volume can cause your dog to tilt his head so that he is better able to hear you.

This post is a part of the Pet Photography 52 Weeks project blog circle. To see what the next pawesome photographer is sharing for the weekly theme, “Head Tilt,” check out Ono Pet Photography in Fairhope, AL. Continue to click the link at the end of each post in the blog circle until you eventually find your way back here.