For over nine years, I considered our dog Hunter to be a Siberian retriever, or better yet, a Heinz 57. (My Pittsburgh people will know what I mean when I say that.) He was a blend of all things wonderful, but we never could quite pin down his genetic “ingredients.”

The breeds we’ve had people guess that he’s mixed with over the last nine years have ranged from Siberian Husky or Malamute to German Shepherd–and everything in between! In mid-October, essentially to satisfy my own curiosity, I purchased a WISDOM PANEL 4.0 Canine Breed Detection DNA test, swabbed the inside of Hunter’s cheeks while he wrestled himself away from me, and mailed it back, eager to learn his genetic makeup in the following two to three weeks.

Two weeks to the day that Hunter’s sample was received, we got back some surprising results: Hunter doesn’t have a lick of Siberian Husky in him! Rather, he’s a mix of eight different breeds, ranging from Australian cattle dog to Samoyed. What?! Check it out. 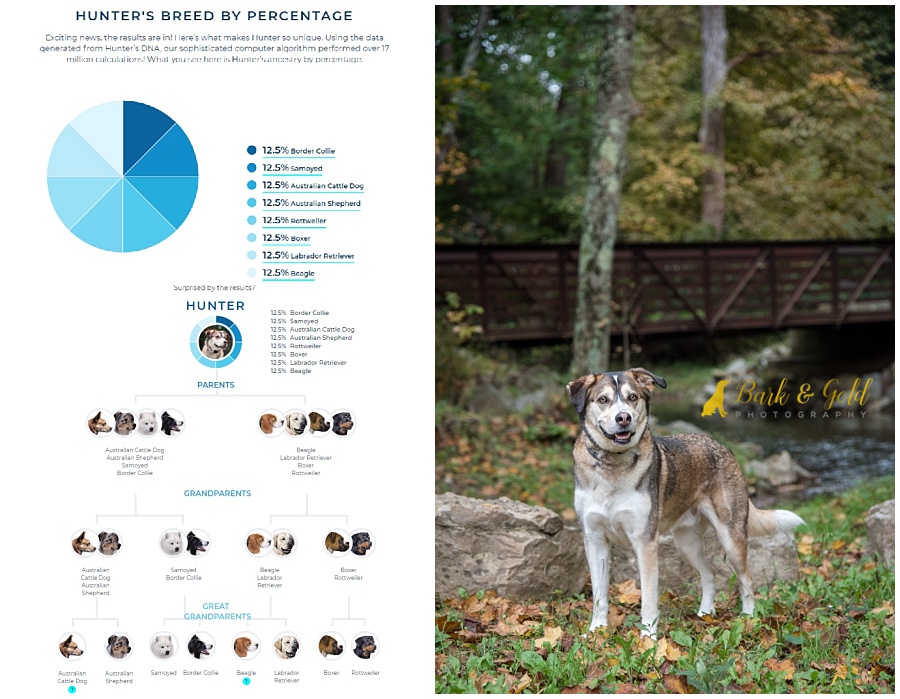 Regardless of whether I see these breeds physically in Hunt, the results were absolutely fascinating. I still can’t say I’m not convinced that there’s not even a hair of Husky in him (I mean, they’re all over my house), but I was especially shocked to see that Hunter has beagle, boxer, and rottweiler in him. His family tree traces each breed all the way back to his great-grandparents, which were Australian cattle dog, Australian shepherd, Samoyed, border collie, beagle, Labrador retriever, boxer, and rottweiler. I can definitely see several of these breed personality traits in him.

My only regret was not testing Hunter sooner. If you’re on the fence about purchasing a DNA test for your fur baby, I encourage you to go for it!

Have you ever tested your dog’s DNA? If so, I’d love for you to share your results in the comments. If you’re interested in testing your own dog’s DNA, use my code FFSHNOV2018 within six months to save $10 on your WISDOM PANEL kit.